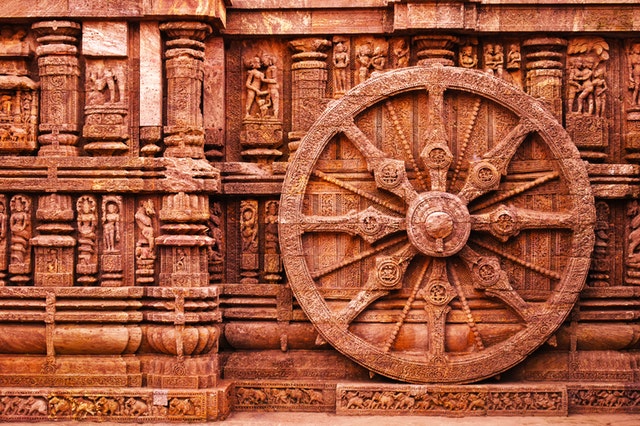 Dharmachakra or Wheels of dharma is one of the oldest ancient, pious and powerful symbols of Hinduism, as well as Buddhism and Jainism. In ancient temples (Ex- Konark Sun Temple) and statues, it was structured. Still, it has deep Dharmachakra significance to Hindus.

Dharmachakra means Dharma wheels or Wheels of law. The word Dharmachakra came from the Sanskrit word Dharma, the symbol of work, duty, creation, protection, and righteousness. In Hinduism, Lord Vishnu (The Preserver) carries the wheel of dharma as a weapon to protect humankind. That is called “Sudarshana chakra”.

Previously, the great kings were given the title of “Chakravarti”, which means ‘wheel-turning kings’.

The shape of Dharmachakra is like a circle or wheel and formed with 3 parts, spokes, rim, and hub. The Dharmachakra in temples has 8 spokes in it, but, in the Indian national flag, the ‘Ashoka Dharmachakra’ has 24 spokes.

Each spoke represents each different significance of Dharmachakra in Hinduism. These are:

Every Dharmachakra represents the righteousness and equality of every organism and shows us the right path to living a peaceful life.

Feature Image Credit: Photo by Anirudh Bharat from Pexels. (free for commercial use)