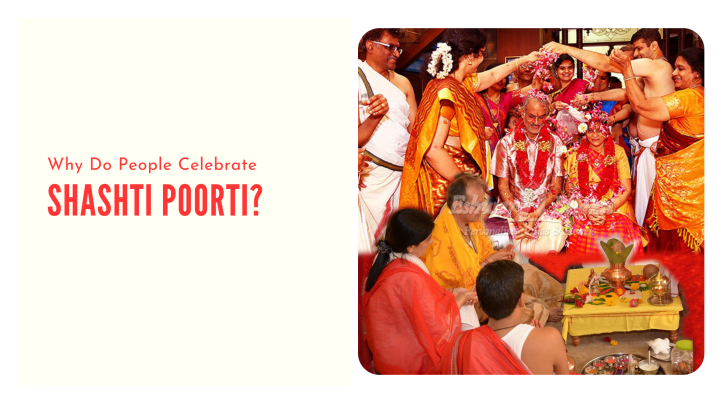 According to Hindu culture, Shashti Poorti is regarded as a traditional ceremony that people celebrate on the completion of sixty years of the male person in the family. This ceremony is known as “Ugraratha Shanti,” or “Shashti Abda Poorti,” or “Mani Vizha.”

However, not many people know that this ceremony is strongly associated with and celebrated as the renewal of marital vows. In Hindu Dharma, a host of significance is attached to marriage. And, it is considered extensively favorable if someone’s marriage has been celebrated for more than sixty decades. Therefore, people observe the opportunity to live a married life for sixty years as a great blessing.

Hindu people actively believe that the sixtieth year of an individual’s life is a remarkable turning point or a significant milestone in the mellowed life that would unfold in the coming years. Besides, even the Hindu calendar has 60 years, named Vibha, Prabha, etc., that keeps repeating after every 60years in a sequence.

However, even the ancient sages acknowledged the sanctity of the sixtieth year in a person’s life. Hence, they drew a few elaborated rituals to mark the special event.

According to Vedic rituals, the sixtieth year posed as the rebirth of the latter. Therefore, people perform this ritual at someone’s birth, and later in life suggested to be repeated.

After completion of these solemnized rituals, the couple has to relish their spiritual yearnings by undertaking Vanaprastha. In this stage, the married couple is bound to fulfill their life’s goal by standing together through observing chastity, living in nature, consuming only fruits, and wearing simple clothes.