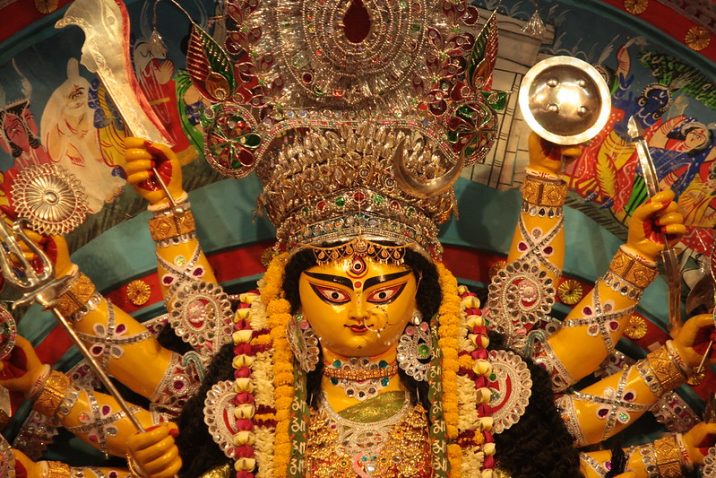 Goddess Durga, yet known as Shakti or Parvati, is the goddess of war and a principal deity of Hindu mythology. This warrior goddess is the ferocious form of Parvati, who defeated Mahishasura.

The composition of the Sanskrit word Mahishasur stands as ‘Mahisa’: ‘Buffalo’ and ‘Asura’: ‘Demon’– the buffalo demon. He could transform into several forms to flurry the rival. However, Mahishasura also gained a boon that no man could kill him, hence during the war of gods and demons, God Indra also got defeated by him.

Consequently, all gods conflicted and appeared to Kailash seeking help from Shiva and Parvati to defeat Mahishasur. All gods convinced Parvati, she is the only feminine energy that can withstand the power of Mahisharus, and kill him.

By combining the divine energies of all supreme divinities (Devas), Parvati was incarnated as Goddess Durga, the representation of Shaktism or power. Therefore, she finally defeated and killed Mahishasur and named “Mahishasurmardini”, meaning The Killer of Mahishasura.

Every year, devotees worship Goddess Durga by celebrating Durga puja or Durgotsava, in honor of her victory over evil.