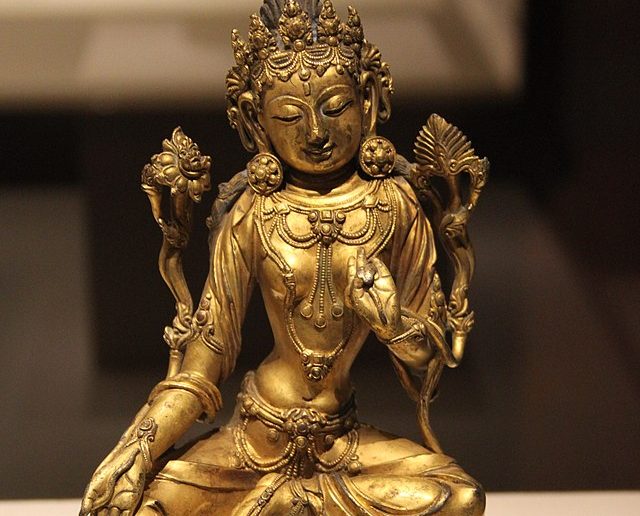 In the initial traditions, the goddess Tara was identified as a Hindu date of protection. She is listed as the second goddess in the group of 10th Tantrik aspects of Adi Parashakti, the powerful Ten Mahavidyas.

A few Hindu accounts have named her Neel Saraswati, who saves and offers the ultimate knowledge, which gives salvation. In Tibetan Buddhism, the goddess Tara (also praised as Arya Tara and Jetsun Dolma) is a female Bodhisattva in Mahayana Buddhism. She is a meditation deity whom people regard as the mother of liberation.

She appeared as a female Buddha in Vajrayana Buddhism, representing the virtues of success in work and achievements. In fact, some Buddhist schools recognize 21 Taras as their study subject. Her meditative practice is used by followers of the Tibetan branch of Vajrayana Buddhism to understand the outer, inner, and secret teachings of compassion and emptiness.

The goddess Tara Mantra is the same for both Buddhists and Hindus, which is:

However, the Tibetans and Buddhists who follow the Tibetan traditions pronounce the mantra as

Praise goddess Tara since her grace and divine blessings will help you attain salvation.