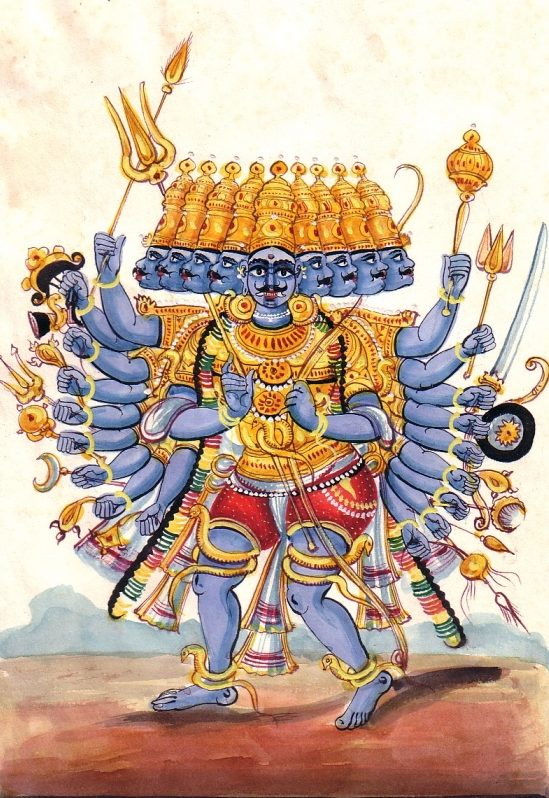 The very much central, compelling, researched, and discussed figure of all time since Ramayana, the king of all demons and asuras– “Ravana”, has always been a topic of debate for centuries. This powerful king of Lanka (now Sri Lanka) was the intellect, knowledgeable person ever, and known for his devotion towards Lord Shiva in Hindu mythology.

He was named as ‘Dasaukha’ (10 faced) or ‘Dasagriva’ (10 headed) as he was always depicted with 10-heads and 20-arms. This identical formation of Ravana was very significant in Indian history.

Intellect says Ravana’s 10-heads defines the 10-emotions or senses of an individual. BUDDHI (Intellect), MANAS (Mind), CHITTA (Will), MADA (Pride), AHAMKARA (Ego), KRODHA (Anger), MATSARYA (Envy), MOHA (Delusion), LOBHA (Greed), KAAM (Lust). Among these senses, one should prioritize the intellect as supreme, because the others are pernicious to one’s soul’s growth.

Despite the advice of the great king Mahabali to keep the intellect only and shun the other 9-senses, Ravana stated that to be an impeccable man, he needs possession of all the senses. Being unable to control his actions and powers, he was driven to his downfall.

Even Ravana’s scholarship and mastery of 64 types of knowledge of all arts of weaponry describe him being the most intelligent person of his time. Hence, Ravana’s 10-heads signifies the 6-Shastras and 4-Vedas; period.

Feature Image Credit: Scan/photo by: User:Henryart (who is owner of the original painting/object/photo) / Public domain