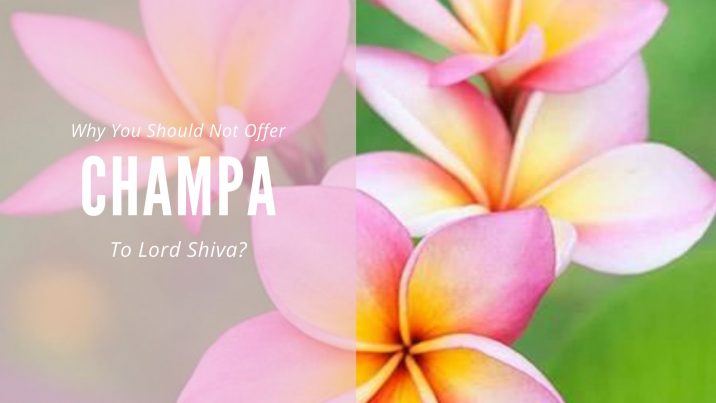 Champa flower or Plumeria alba is a type of flower that comes in like a half dozen varieties. This flower is entitled with several names in different languages. All categories of Champa flowers are famous for their exquisite fragrance and have been a part of the Indian traditions right from the ancient era.

This beautiful, delightfully scented cream yellow flower is used often in worship and other religious ceremonies, especially for Goddess Laxmi. However, this fragrant flower remains kept away from Lord Shiva. And the Shiva Purana explained the reason behind this.

This scripture has a fascinating tale to share, where it’s mentioned that Lord Shiva cannot deny a devotee who worships him with Champa flowers. Sage Narad once had come across an evil brahmin, plucking flowers from the Champa tree for his evil deeds.

When Narad approached the Champa tree whether someone plucked its flowers, the tree denied. Although Narad found out the truth when he observed Shivalinga from the nearby temple was covered with Champa flowers.

Immediately, Sage Narad cursed the Champa tree that it will never be accepted in the prayer of Lord Shiva ever again for not telling the truth to the sage and misleading him. Since then, Lord Shiva has to stay away from this aromatic flower.