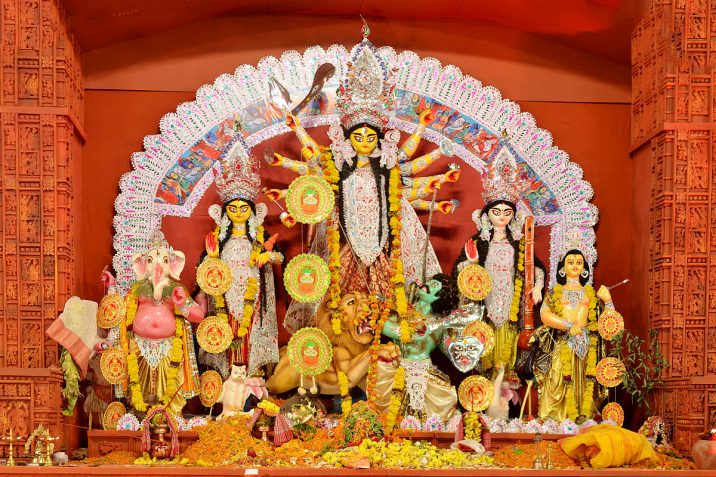 Durga Puja or Durgotsav is the grand Bengali Hindu festival that occurs in the Hindu month of Ashwin (September-October), observed in the Indian states of West Bengal, Assam, Odisha, Tripura, Bihar, and Jharkhand plus Bangladesh country including other western countries as well. Started with the Mahalaya and continues for 10days, the Durga Puja festival ends with the pompous immersion of Goddess Durga on Maha-Dashami.

Usually, Durga puja starts on Sasthi (the sixth day from Mahalaya), however on this 2020 year, the unusual has occurred. The Mahalaya has fallen on 17th September, the day of Vishwakarma Puja, and the Durga Puja befalls 35days after Mahalaya.

Mahalaya is the first and auspicious day of this magnificent festival when Devi Durga’s eyes are drawn.

Goddess Durga, the symbol of Shakti or energy, is one of the supreme deities of Trinity Goddesses or Tridevi (Parvati, Laxmi & Saraswati). She represents the women-power, shows fierceness towards evil, and motherhood towards her devotees.

This Hindu festival is to pay homage and worship Goddess Durga or Goddess Shakti for her victory over the demon Mahishasura. And, also the celebration of Maa Durga’s homecoming, as she comes to the earth, her maternal house with her kids: Ganesh, Kartik, Laxmi, and Saraswati, along with their vehicles.

The main celebration starts from Sasthi with Sasthi Puja or Bodhana, to Saptami, Maha Ashtami, Maha Navami to Maha Dashami, or Vijaya Dashami. On Sasthi, weapons are arranged in Durga’s 10-hands.

On Maha Saptami, the Navapatrika bathing is done with the holy water. Maha Ashtami is the grand day when devotees collectively perform ‘Ashtami Pushpanjali’ or ‘Maha Pushpanjali’ by chanting Durga mantras and seek blessings from the deity. Then Sandhi puja is performed with proper rituals by offering 108 Lotus and lighting of 108 lamps.

Maha Navami, the ninth day of the festival, is marked for Homa and a special Bhog (puja gift). In some areas, Kumari puja or Kanya puja is still observed (worship of little girls as the earthly representation of Durga).

And here comes the Maha Dashami, the gloomy day for all netizens as Maa Durga will be immersed in the water and return to Kailash. In the evening of Dashami, married Bengali women play with vermilion, the celebration called ‘Sindoor Khela’, and people perform traditional Dhunuchi Dance in front of the idol. In the end, instead of saying goodbye, devotees ask Maa Durga to come again “আবার এসো মা” and plunge her idol into the water by saying: Will be again next year- “আসছে বছর আবার হবে”.

Durga puja is the emotion of all Bengalis, the celebration of all communities, the festivity of new clothes, and the whole night pandal hopping. In these five days, the whole West Bengal, especially Kolkata, is illuminated with various lights, decorations, theme pandals of crores/lakhs Rs., and food stalls in every corner of the city of joy- Kolkata.

Durga Puja is impossible without the sound of Dhak (Indian membranophone instrument). The sound of Dhak makes the citizens of each corner of the city feels like Durga Maa has arrived. Let’s have a look:

Do visit Kolkata, celebrate and rejoice the richness of the Durga Puja festival and Bengali culture heartily.